Well, it finally happened... We experienced some real snow in Denver, and it couldn't be any more welcomed. Colorado needs the moisture, the mountains need the snow, and now we can actually say it is winter here. Hopefully your tires are ready since it seems like the city isn’t too concerned about plowing the roads, (though in fairness this jobs shortage thing is no joke – seriously, have you seen how empty the grocery stores are lately?). Anyway, for this month’s Cafe Session, I’m talking Winter Blues and how to mitigate them with some fun winter activities around town. I also answer the age-old question: wtf are "flavor crystals"?

Weather starting to take its toll on you? Ski season hasn’t exactly panned out the way you’d liked? Don’t have a Valentine while all your cool friends are making dinner reservations? OK I’ll stop rubbing it in, but these are all very common post-holiday feelings that make you yearn for something to look forward to. That, on top of regular seasonal depression (anyone else missing chilling on a patio after work with a beer and having it be both sunny and warm out?), can make for some serious Winter Blues. So I’m suggesting you leave your comfort zone and try something new around town! And yes, I am practicing what I preach!

It turned out to be an awesome time! We (me and some of the Enterprise Team) tried lots of delicious beers – including one that you can only get at that location – got a tour of the entire taproom and enjoyed some delicious High Society Pizza. 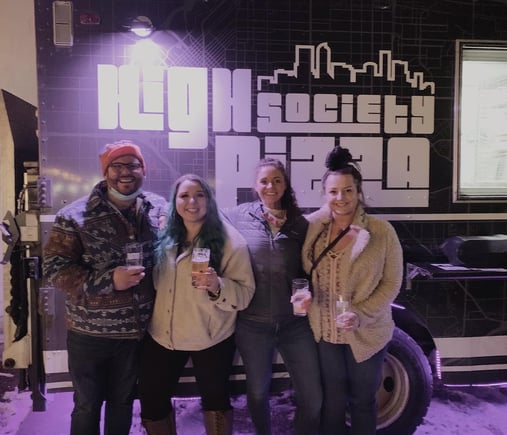 That wasn’t even the end of the night either. After we partook in the tasty beers Ratio has mastered, we headed over to a new establishment that a couple of our Enterprise RiNo members opened recently called The Beacon. We joined others there to celebrate Dolly Parton’s Birthday. In short, the night was a whirlwind of drinks, laughs and great times! Of course worth it, but did make for a tiny struggle getting going to full speed the next morning.  Luckily, there was plenty of caffeine onsite (we are a Café after all) to bring me back to life. And if you go out after work to shake off your Winter Blues, I’ve got plenty of coffee onhand to help you the next morning too!

In case you need some inspiration on what to do to shake your blues, I’ve put together some upcoming Denver & RiNo events below. Turns out there is plenty going on for all to enjoy if you just do a little research!

Daily from 5pm-8:30pm at the Halcyon Hotel in Cherry Creek

WHAT ARE THE “FLAVOR CRYSTALS” IN FOLGERS COFFEE?

Time out. People still drink Folgers?!? I thought with how much the coffee culture has improved over the last few years, especially the coffee scene in Denver, that no one was drinking that dirty water anymore?

Ask and you shall receive though! This took me a little time on Google because I wouldn’t dare try that stuff with the great coffee on the brewers from Queen City and the delicious espresso I use from Novo Coffee, but here you go:

Essentially “flavor crystals” are just instant coffee. "Coffee" made from dry coffee extract that you pretty much just pour hot water onto. Think of how you made hot chocolate with those packs of powder as a kid, kinda like that! With that in mind, there are two different ways to make instant coffee and get said crystals.

The first way is called Spray Drying. What’s done here is you get a super-hot (like 480 degrees hot) and dry room (or probably more likely a large, controlled container). Then you spray liquid coffee into this hot and dry air in a mist form. The liquid from the coffee then evaporates and the coffee remnants will fall to the ground. These are collected and called “Coffee Crystals”.

The second way is by freeze drying coffee. This is how the Huff Post explains that process:

“Freeze drying coffee involves a few steps. First, the coffee is cooked down into an extract. The coffee extract is chilled at about 20 degrees F into a coffee slushie. The coffee slushie is then further chilled on a belt, drum, or tray to -40 degrees F until it forms slabs of coffee ice. The coffee ice is broken into granules. They’re then sent to a drying vacuum, where the ice vaporizes and leaves behind instant coffee granules."

From what I gathered, you sort of brew the coffee beans then un-brew them just to re-brew them when you actually want to drink your coffee. Just come buy something from me at Rise, it’s much easier!

If you have a topic or question you’d like me to tackle next month, don’t hesitate to ask! Submit an anonymous question or problem here. No name or email required.